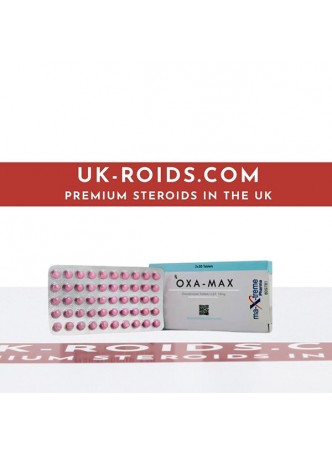 Oxa-Max is a product from Maxtreme Pharma, which is based on the active substance, Oxandrolone (Anavar). Initially the drug was developed for the treatment of HIV. Following that, it later became used by athletes and bodybuilders for use in cutting cycles.

Oxandrolone is pretty much advanced dihydrotestosterone. It has an anabolic activity which is 4 times greater than that of regular testosterone. At the same time, its androgenic activity is lower and is about a ¼ of that of testosterone.

Anavar is not often used in mass gaining cycles. It has other positive qualities and effects that are necessary for professional athletes.

Not only is using Oxandrolone cost-effective, but it is also characterized by the following results:

Both men and women are able to use the drug. We recommend following the dosage and duration of treatment closely.

The starting dosage is 20mg per day. After a week, the dose is increased to no more than 80 mg per day for up to 8 weeks.

We recommend that women use smaller doses of no more than 10 - 20 mg per day.

Anavar is thought to be one of the safest anabolic steroids because it is safe for female athletes to use. With that being said, it is still important to keep an eye on the dosage being used.

ANAVAR COMBINATIONS WITH OTHER STEROIDS

Using Anavar with other drugs that work the same has shown good effects. Anavar is mostly used with drugs that have a high androgenic activity, such as: Testosterone, Primobolan, and Sustanon. Using the previously mentioned combinations does not only to improve the effects but also to stop possible side effects.

SIDE EFFECTS OF ANAVAR

There are almost no estrogenic side effects because the drug suppresses aromatization. Gynecomastia and fluid retention are not likely with use of the drug.

Exceeding the drugs recommended dosage and duration, may bring about the following side effects:

Possible reasons: hypersensitivity to the active ingredients or abuse of the dosage without a specialist’s approval.

Athletes speak highly about Anavar and highlight the fact that there is minimal chance of developing side effects. They report improved muscle definition, increased endurance, and, in general, excellent results after a cycle.